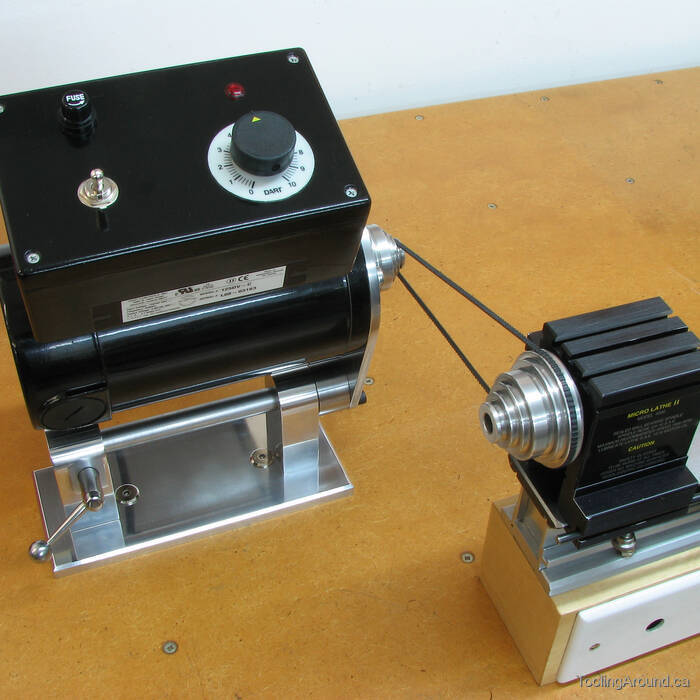 It happened like this. I started with a very old 1/4HP AC motor. It worked fine, especially after I replaced its bearings, but it was pretty big; the motor mount I built was not one of my better ideas; and I knew that a variable speed motor would be better. My wife gave me a Sherline motor and controller as a Christmas gift and I adapted it to the Taig lathe. It was a wonderful match. However, I later became concerned about the motor on my Taig mill. It worked fine, but it was out of balance and I knew that the Sherline motor would work well there. So, when two of my enablers took me in hand to a motor repair shop in an industrial park, I was primed to purchase a very nice new Bodine DC motor (at a remarkably good price) and the parts for a controller. What you see on this page is the result.

There are lots more pictures, so I've divided them into multiple pages:

So, how has it worked out? I've been very pleased with the result. The only remaining change to make is to replace the Taig pulleys with two-step pulleys. This isn't strictly necessary, as the 2M belt on the stock Taig pulleys does the job just fine. However, I want to achieve two more things. First, I would like to get lower spindle speeds while keeping the motor speed up a bit to help ensure sufficient torque. Second, the six-step pulleys certainly aren't required and a two-step pulley would hopefully expose enough of the end of the spindle to permit the attachment of some other things I've been thinking about. On balance, it's a successful modification.