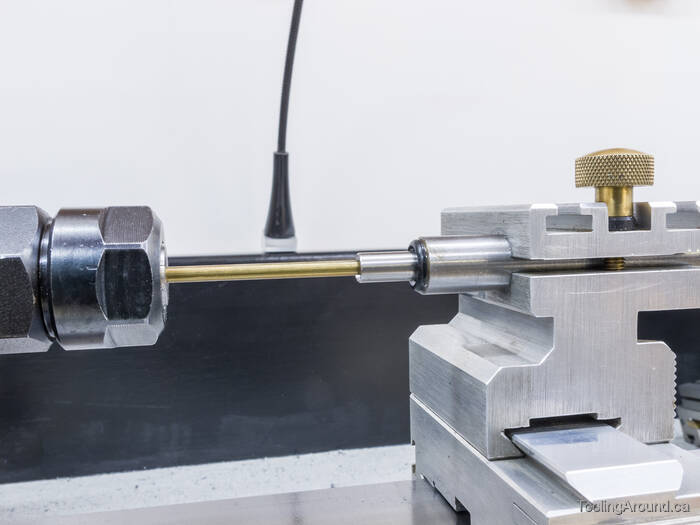 Sometimes, when turning a slender work piece, support is needed at the tailstock end. Although the dead centre on the Taig tailstock ram can be used, one must be careful to provide sufficient lubrication between the work piece and the dead centre. Many of us prefer to use a live centre.

The construction of the Taig live centre intrigued me, as it offers an opportunity to adapt it for use as a cup centre. As the name suggests, a cup centre supports a work piece in a funnel-shaped “cup”, so no hole need be drilled in the work piece. This is important if the work piece has already been finished on the end. This was the case when a friend of mine needed to support the end of gun barrels that would grace the deck of a museum-quality scale ship. The diameter of the cascabel on his 6pdr guns is 0.115″, so it calls for a very small cup centre. While I was at it, I made three, with overlapping sizes.

Here's the Taig live centre, as received from Taig.

The centre arbour can be withdrawn, complete with the O-ring that keeps contaminants from getting into the body. The butt end of the arbour rests on one of a pair of ball bearings that carry the arbour's thrust load. To the right of the balls, you see a spring that is compressed between the inner ball and a grub screw, thereby maintaining pressure on the arbour.

Just inside the body, you can see an SCE47 needle roller bearing, which carries the live centre's radial load.

Now, the first interesting thing is that the arbour's diameter is 0.250″, which happens to be a very convenient size, as I have some 1/4″ drill rod. Based on my measurements, as I turned the drill rod while checking at a several points with a dial caliper, it is round, something than cannot be assumed about bar stock, generally. It isn't as good a bearing surface as the supplied arbour, which is ground to a fine finish, but it seems satisfactory for my purposes. (If I wanted to be fussy, I would have made the effort to acquire a 1/4″ drill blank.)

The second interesting thing is that the included angle of a typical cup centre is 60°, which is the same as the hole produced by a centre drill. So, I cut off two roughly two-inch lengths of drill rod. After facing their ends, I ground one end of each nice and flat on a belt sander, to sit against the ball bearing in the live centre. Then I drilled cups into the opposite ends, using a #1 centre drill on one and a #3 centre drill on the other.

Here's how the larger cup centre looks when supporting a work piece held in an ER-16 collet on the headstock.

To make an adapter for larger work, I cut off a short length of 1/2″ steel bar that I long ago salvaged from a computer printer. I centred it with care, as I wanted the holes I would put in it from opposite ends to be concentric.

I started with a centre drill.

Using a series of progressively larger drill bits, I enlarged the hole to barely under 1/4″.

I used a 0.250″ reamer to bring the hole to its target size. Always remember to only turn the spindle in the direction that produces the cutting action, including when withdrawing the reamer. Never turn the other way, to avoid damaging the reamer.

While turning the headstock spindle by hand, I relieved the sharp edge left by drilling and reaming, to make it easier to slip the adapter over one of the smaller cup centres.

Here's the smaller cup centre and the partially-completed adapter.

With the adapter once again carefully centred in the four-jaw chuck, I started on the other end with a centre drill.

Here's the top slide, being set to 30°. This method is close enough, as the 60° angle isn't critical.

Here's the setup to start boring the cup.

The inside is left just a little rough, so it will grip a work piece. That's my story and I'm sticking to it.

Here are the three cup centres, posing for a final photograph.

It would be a simple matter to make another, larger cup centre, of course. An alternative to the adapter that I made would be to silver braze a stub of bar stock to a length of drill rod, mount the drill rod in an ER-16 collet and drill and bore the cup. This would avoid the need for a precise fit between the adapter and a separate length of drill rod. It would also simplify workholding if you decided the make a bullnose centre to go with the cup centres.