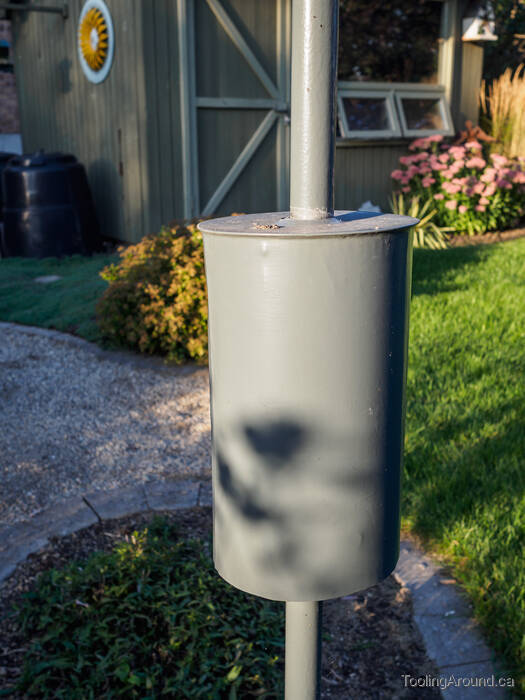 After mounting a bird feeder on its mast, it seemed like a good idea to deter squirrels from feasting on bird seed. I decided to make something to, well, baffle their attempts to climb the mast. I liked the design of those baffles that are too big for a squirrel to grasp and too wobbly to inspire confidence. So, I checked my stash of bits and pieces and found what was needed.

I had a scrap of 6″ sheet metal pipe exactly the right length for a squirrel deterrent. Before forming it into a pipe, I bent one edge over and tapped it flat, to make a safe edge that won't cut someone.

After rolling the pipe, I used some wire to hold the joint in alignment while I soldered it shut.

I had an end cap sitting around from a different project that never got off the ground. It needed a hole in the end, for the bird feeder's mast.

...produced a form to shape the edges of the hole.

Some tender mashing and battering...

The next step was to press the end cap into the end of the pipe and solder it in place.

Meanwhile, back at the vise...

...I made this strange thing.

The next step was to draw as large a circle as would fit on one end of the workpiece.

Now to make it round. Chisels and a hand plane got me this far.

This is rather pushing the size limits of the Taig lathe. The next step would have been to use riser blocks, but I preferred not to because the tool rest would only raise just so high.

A little more sawdust and it was round. The end is rounded to more or less match the shape of the flange around the hole in the end cap. The groove is for a strap clamp.

After splitting it at the hardboard spacers and scraping off the remaining hardboard, I had this...

...which mated with this.

A coat of paint and it was ready to use.